Thinking of Paris 20 Years Ago 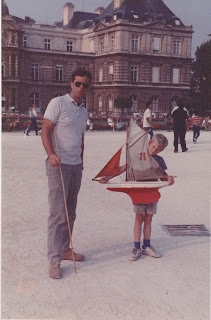 A recent phone call from my son conjured up beautiful memories of Paris twenty years ago. Jack needed a photo from his childhood for a project he is working on. I scoured closets & cupboards to find one to scan for him. The photo I found was taken in Luxembourg Garden in 1990, when Jack was seven years old. My husband & Jack had just rented a sailboat to sail in the grand public fountain there. They were doing what children & their caregivers have done for centuries. The photo is timeless. It could just as easily be today or ,except for the dress, 100 years ago. Luxembourg Garden has been open to the public since the 17th century. The chateau & it's gardens were built by Marie de Medici in memory of her husband Henry IVin 1610. It was her desire to recreate her childhood home, Florence's Palazzo Pitti . The park remains today one of the most beautiful public spaces in the world; enchanting to adults & children alike.
Here is what the website PPS/ Project for Public Spaces has to say:

The Luxembourg Gardens may well be one of the most successful parks in the world, partly because it is so well integrated into the fabric of the city around it, which makes it easily accessible. There are also many things to do there, evidenced by the wide range of people who use it: children, older people, Sorbonne students, people cutting through on a lunch break, etc. People come to stroll, play chess, to sit and read, people watch, to sit at one of the cafes or to bring their children or grandchildren to one of the many attractions for kids. Organized activities at the park include tennis, pony rides, puppet theatres, and toy sailboat rental (children float them in the large central fountain). Visitors can also stop inside the Palais and attend a hearing of the French Senate, which is open to the public.

My grandson, Jack, turns 9 on Friday. I hope I will be able to take him to Luxembourg Garden before he is too old to want to sail a toy boat. Happy Birthday, young, Jack! I am so proud of you!

Tonight at 8:00 pm in celebration of Earth Hour ,please, turn off your lights & non essential electrical devises.
Posted by Sally Tharpe Rowles at 7:32 AM 1 comment: 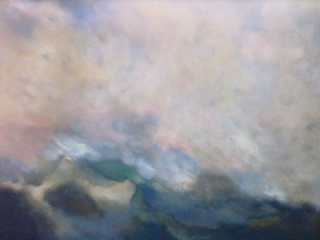 Today is World Water Day. In observance of this day, dedicated to raising awareness of the plight of the worlds water supply, I am reposting something I wrote on my website blog a year ago. It is of course as crucial today as then & seemed appropriate.
Once when asked what I paint a friend spoke up before I could answer & said “water”. Often my paintings do have a water like quality & I am certainly inspired by the beauty of reflections on water. In my everyday life I try to be green & as part of that effort I try to conserve my water usage. But I have to confess I had been more focused on global warming than on the global water supply. That is, until I saw Sylvia Earle’s prize winning talk on TED about what she calls the blue heart of the planet. I was so moved by this beautifully photographed piece that I wanted to share it . So I do hope that anyone that may find their way to this spot will take the 18 minuets it takes to watch this eye opening lecture. Now when I paint “water” I will do so with a deeper respect & a greater since of urgency
Posted by Sally Tharpe Rowles at 12:17 PM No comments:

Sun is out, the river is high ; back to the studio with Emily 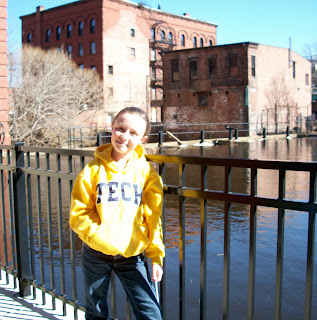 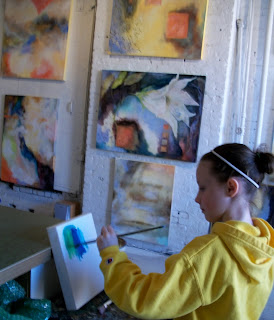 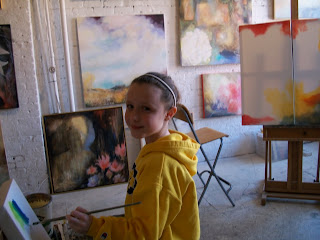 Last week end was a wash, literally. It rained for what seemed like forty days & forty nights. In fact, it was more like three days & three nights, but that was enough. There were certainly lots of jokes & references to Noah's ark brandished about. We experienced some serious leaks in our domicile but thankfully our ceiling did not completely fall down as I had feared. The Naponset River, on who's banks we live, crested just below the flood line. It had not reached that hight since 1955, when a huricane hit the area.
The sun has come out. Warmer weather has arrived. Bulbs are popping up. And everything is looking wonderful.
As a result of the rain I have not been to the studio for awhile. I have done very little painting this month.
Emily is on school break while her siblings are still in school & her mom is working, so she came over to spend some time with me. After checking out the river we headed off to the studio. She painted a beautiful painting. Unfortunately we forgot to take a photo of the finished product. And she gave me some good tips on what I was working on. We enjoyed our time together & the chance to be back in the studio.
Posted by Sally Tharpe Rowles at 6:22 AM 1 comment:

... when the world is puddle-wonderful 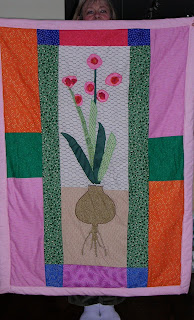 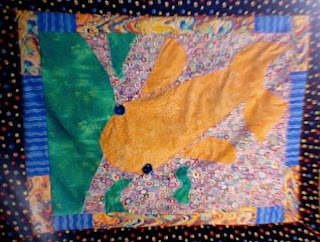 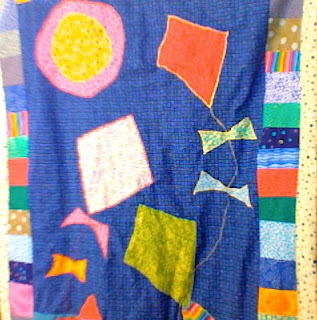 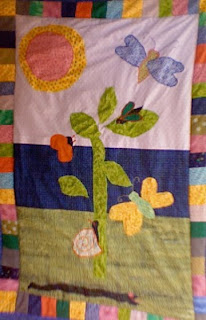 This weekend I had every intention of writing a thoughtful post about springtime & art. But we are being hit by a major nor'easter. We are being battered by high winds & rain outside & now my ceiling has sprung multiple leaks on the inside as well. Dodging buckets & sauce pans that are catching the drips, my thoughtful post about spring ...well, I'm just not feeling it. So instead I have downloaded some old pic's of some of the baby quilts I have made over the past few years. They are bright & colorful & add a bit of whimsy to an other wise dreary day. And each one does in fact portray some aspect of springtime: a bulb in full flower, goldfish in ponds, kits flying, all kinds of critters & of course, a big calico sun. Someday I may blog about my conflict between crafts & fine art but today there is no conflict. Today is a crafty, cozy kind of day. Nothing too serious, just hoping that the rain stops soon & the sun comes out. I will wax poetic about spring & it's affects on art some other day.
Posted by Sally Tharpe Rowles at 6:29 PM 1 comment:

A Tribute to the The Boston Public Library

The Boston Public Library was the first publicly supported library in the United States. It was the first large library open to the public in the United States, and the first public library to allow people to borrow books to take home to read. All adult residents of the state are entitled to borrowing and research privileges. According to its website, the Boston Public Library contains 8.9 million books, making it one of the largest public libraries in the nation.
Because of state budget cuts the library's future looks bleak. As a lover of books, as well as the library system it's self, I am concerned. Libraries are a great equalizer. They are there for every citizen no matter what station in life. I hope that our state will live up to this proud history as it decides the fate of this grand institution.
Posted by Sally Tharpe Rowles at 7:47 AM 3 comments:

March First Friday at SoWa... a touch of spring 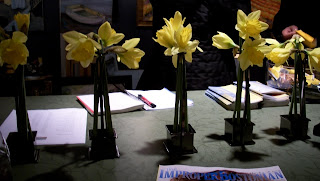 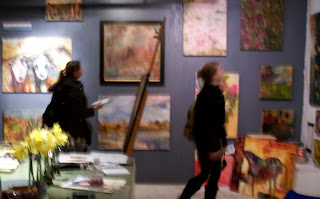 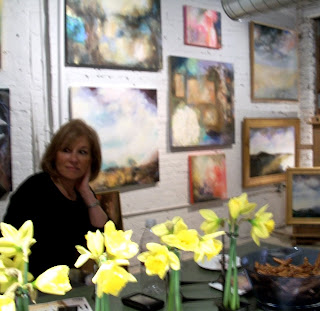 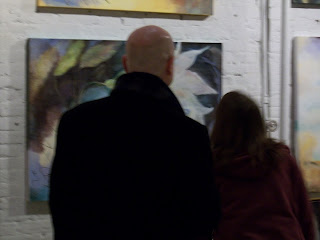 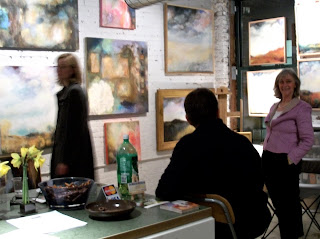 I failed to post a blog announcing the March First Friday which kicked off this weekend. Last month I sent out E-invites as well as announcements but this month I just relaxed & let it happen. The evening was almost balmy, even though the previous week had seen icy rain & snow flurries. Happily the mild weather brought out the crowds. Everyone seemed to enjoy just being out, mingling & looking at art. I had bought a bunch of daffodils, the first of the season, which added a touch of spring inside as well as out. We were especially happy to greet our good friend , Theresa Bricker, her husband Todd & darling daughter Sidney. Unfortunately I forgot to get my camera out in time to snap a pic of our youngest little art critic in her colorful multi patterned dress & shinny silver boots. However, I did get Dottie & Anna to help take a few shots before the evening came to an end. All in all it was a lovely night. I hope anyone who was not able to come this month will be able to make it to first Friday in April.

Posted by Sally Tharpe Rowles at 7:37 PM No comments:

Winter fantasy & an invitation in Paris 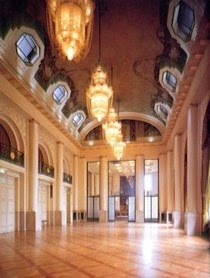 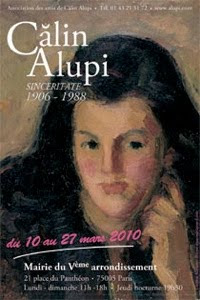 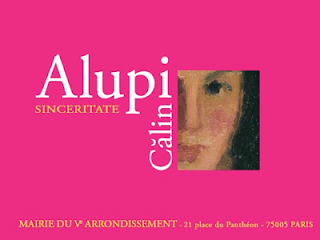 Yesterday I spent most of the day on the internet searching for budget airfares & hotels in Paris, in order to indulge a winter fantasy. I did find some sweet hotel deals but prices for flights were exorbitant. You see, I recently received an email from a former teacher, Antonina Alupi, inviting me to a vernissage in Paris. This preview commences the opening of an exhibition honoring Anonina’s father, Cålin Alupi, a renowned Romanian post-impressionist painter. The exhibit will be held in the Mairie of the Vème Arrondissment, a prestigious building situated just across from the Pantheon. It will feature about 100 works, owned by Romanian museums and various private collections. In the past few years the government of Romania has honored Alupi with retrospectives in his native country, from which The Calin Alupi Reference Book was compiled by his grandson, Nicolas Petrescu- Alupi. Now Paris, with the patronage of the Romanian Embassy in France, bestows a similar honor in the city that became Alupi’s adopted home. For this occasion a 44 page Beaux-Arts magazine "Hors Série" album has been published.

The invitation that I received read as follows:

We would be very honored if you could join us for the opening, on:

How I would love to go. It would indeed be my honor to attend. But my fantasy did not stop there, it also included my grand daughter, Emily. She & her two siblings, Jack & Gracie, attend a French immersion school in Milton, Ma. They speak French beautifully & it has always been my desire to someday take each of them to France. Emily, the oldest, would be the first & what better opportunity than this. Knowing that she had a vacation in March, I phoned her mother to see if the dates coincided. They did not. Alas, I was forced to accept that all of this had just been part of a beautiful winter fantasy. As much as I would have loved to be a part of this amazing celebration it is not meant to be. However, although I will not make it in person I will indeed be there in spirit. Félicitation Antonina et Nicolas et bonne fête! Merci de m'inviter.

Posted by Sally Tharpe Rowles at 10:52 AM No comments: